When Harald Siepermann started to work on the production of Walt Disney’s Tarzan in July 1995, his job was to explore visual possibilities for the gorilla family, and their relationship with a young Tarzan. Once that task was completed, the directors Kevin Lima and Chris Buck set Siepermann on another path, to create visual development for the characters in the movie.

Harald Siepermann started with this task in January 1996, and the first characters he worked on was Professor Archimedes Porter. The first direction in exploring this character was somewhat odd. Since the movie was animated and it dealt with a primate world, the directors thought it would be fun if Porter had some resemblance of a monkey himself. Harald took that task to his hart. Below are some of these studies:

Despite Harald’s well received designs, the directors decided to keep Porter more in human form, and Siepermann started to look for a more realistic approach. “It was his first time in the jungle and he was to be completely overwhelmed by what he saw and found,” commented Siepermann on the character. “Things and animals he so far had encountered only in the books he had studied and written. He would get lost in some small detail, a frog or a bug, and he would overlook the gorilla behind him. He needed Jane to take care of him. I thought a lot of Catweazle, a character from an English TV-series from the seventies, which nobody in the states knew about. Another big influence was Jack MacGowran in his role as Prof. Abronsius in Roman Polanski’s Vampire Killers, a movie only Kevin Lima knew about.”

A big breakthrough with the character came when Harald Siepermann thought of Albert Schweitzer, a German philosopher, humanitarian, and musician. “I didn’t know where to go visually with this character, because I didn’t want to use other cartoon-professor as reference,” commented Siepermann. “I wanted to get away from that cliché and was looking for some other kind of inspiration. Then it hit me. Some sketches I had done reminded me of Albert Schweitzer, a philosopher, doctor, musician and humanist, who founded a hospital in the jungle at the beginning of the last century. Always very much a gentleman, always in a white shirt and a bowtie.”

This was April 1996 and during that time Harald was working for 6 months at the Walt Disney studio in Burbank. “Again, when I told that to the team, nobody had heard about him,” continued Siepermann. “There was no google at the time, so I was more than lucky to find a German book about Schweitzer in a second-hand bookstore in St. Monica. I made a board and sold the idea to the directors.” Siepermann continued to develop Professor Porter in this direction. His designs where very much appreciated by the directors and were the starting point for Dave Burgess, the Supervising Animator, who brought Porter to life on the screen.

Below are some of Harald Siepermann’s designs:

In August 2003 Harald Siepermann created character design for a project called Miss Mary Poppins, that was slated to be an animated feature film. The story treatment was developed by Greg Manwaring and Patrick Gleeson, and was a prequel to the beloved Walt Disney movie from 1964. It tells the story about a young Mary Poppins, and how she came to be the magical nanny.

The project was developed for the Walt Disney studio. Harald Siepermann was asked by Greg Manwaring, with who he befriended since the days of Who Framed Roger Rabbit, to create character design for a young Mary Poppins, to have some visuals for the pitch of the project.

While the people at the Walt Disney studio really liked the project, it was never green lit because at that time the Travers Estate did not allow the studio to develop anything further with the property.

Below you’ll find some of Harald Siepermann’s designs.

Visual development art by Harald Siepermann for Walt Disney’s Tarzan. When Harald Siepermann started on Tarzan his job was to explore visual possibilities for the gorillas and their relationship with a young Tarzan.

In continuation of the post The Gorillas of Tarzan, here is more visual development art by Harald Siepermann that he created in the second half of 1995 for Walt Disney’s Tarzan.

In continuation of the post about Harald Siepermann’s transition from Mulan to Tarzan, this post is about his first assignment for Walt Disney’s Tarzan.

During Harald Siepermann’s first conversation with the directors Kevin Lima and Chris Buck in the summer of 1995, they asked if Harald wanted to explore the primate world and their relationship with a young Tarzan. Siepermann went back to Germany, and, based on the book Tarzan of the Apes by Edgar Rice Burroughs, he did just that. 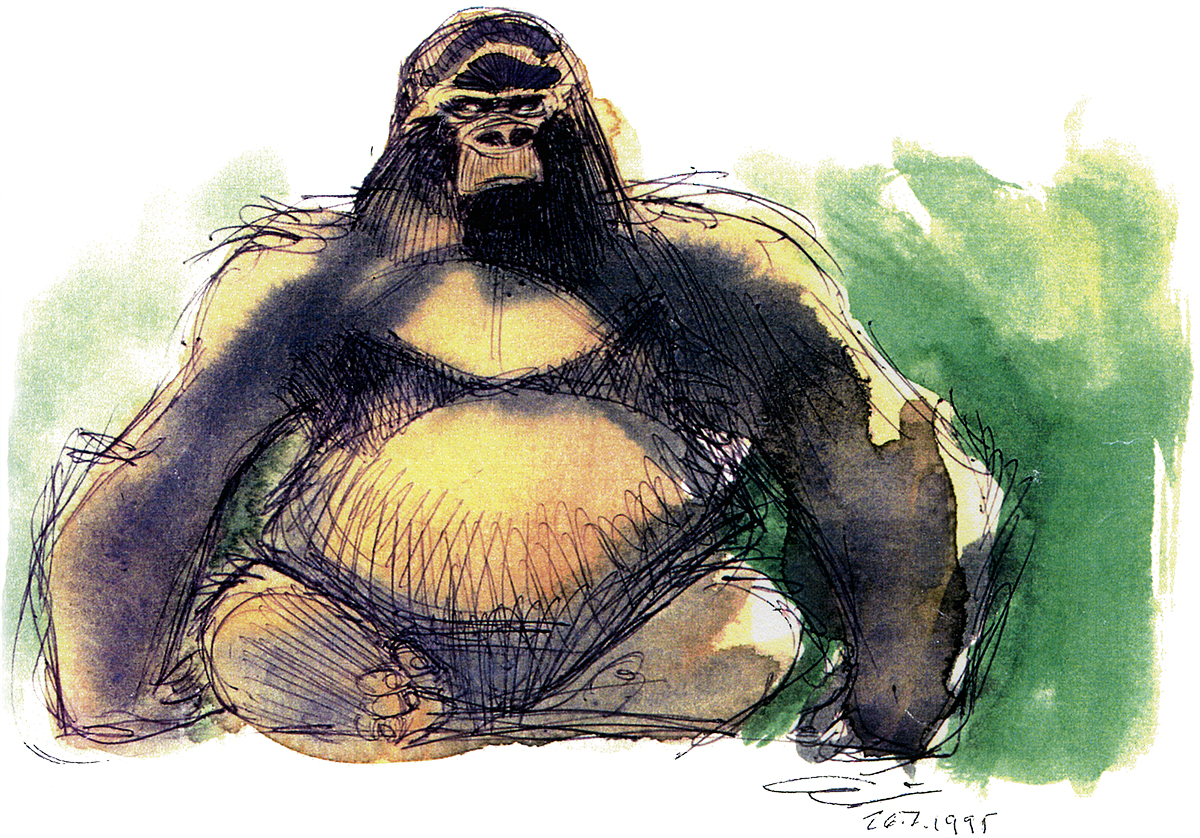 The above illustration was Harald’s very first gorilla drawing for Tarzan. “This is my favorite drawing right here,” he commented about the illustration. “I remember doing this coming straight from the very first meeting with Chris and Kevin, after they had introduced me to the project, asking if I was interested. ‘Ok,’ I thought, ‘they want me to do gorillas, what do they look like again?’ and I did this small drawing, without reference with just a ball pen, some watercolor and a bit of coffee…, yes coffee, and I was just lucky. This gorilla has an incredible presence, he’s just ‘there’. It’s one of those phenomenon’s, it’s your first go at something, beginners luck maybe.”

From his home studio Siepermann created as much gorillas as possible and exploring different artistic approaches. Some more realistic and some more cartoony, and some with a young Tarzan. The illustrations below are just a few of the many gorilla designs.

In continuation of the two previous post about Oscar and Rebecca from the cancelled Walt Disney project Fraidy Cat, here’s another post about the character Doris, the owner of the cat Oscar.

During the period that Harald Siepermann worked on Fraidy Cat, the script described Doris as a single lady in her early twenties, wearing a thick rimmed glasses, and who lives in a small apartment in London. She works as a secretary in a small office building across the courtyard from her apartment. From the windowsill of her apartment Oscar and the goldfishes Bernard and Herman follow Doris throughout the day. They wonder what she’s doing there sitting down all day, while she can do that at home as well. The lonesome Doris has a shy and introverted character, and like Oscar has to gain more confidence throughout the story, Doris makes a personal transition as well.

Here are various illustrations by Harald Siepermann with different design approaches in the search for a possible look for Doris.

Today it has been two years since John Watkiss passed away. Harald Siepermann and John Watkiss were good friends. They met each other when Harald was working on the development of Who Framed Roger Rabbit in London in 1987. Furthermore they both worked on the visual development of the Walt Disney projects Tarzan and Kingdom of the Sun.

His work on Tarzan is praised for his amazing jungle scenes which he drew on large canvas, and his great detail for the human anatomy of the character Tarzan. Here are some of his designs for Tarzan from Harald Siepermann’s archive.

“He did one of those a day,” commented Harald Siepermann about Watkiss jungle paintings. “And then something, the man is a real genius, and that includes all the pros and cons, and he knows it. But funny enough I got along pretty well with him, and I visited him on a regular basis in his then Glendale-home.”

Besides his Disney work, Watkiss is also known for his portraits. “He repeatedly proposed to do a portrait of me,” commented Harald Siepermann, “and I could bite my own ass, that we never got around to make it happen.”

This year it will be 20 years since the Walt Disney animated feature Tarzan was released. Harald Siepermann worked three years as visual development artists on that movie, and through his artwork had a lot of influence on the look of the characters in the final film. This year we’ll dedicate many post to Harald Siepermann’s work on Tarzan. First let’s see how his involvement started.

In the summer of 1995, Harald Siepermann worked for several weeks on Mulan at the Walt Disney studio in Burbank. He worked on several characters, among them the famous Mushu, but also Chinese Soldiers. “My job on Mulan was as good as finished and I was merely waiting for my flight home, when we saw a Chinese movie for reference,” reflected Harald Siepermann. “A very brutal and gory movie, with lots of blood, beheadings and severed arms and stuff, everything a good movie should have in other words. Just for fun and to kill the time till lunchbreak I made a few over-the-top-sketches to get it out of my system. And also just for fun, I boarded them.”

These Chinese Soldiers caught their attention of Kevin Lima and Chris Buck, the assigned directors of Tarzan. “I remember these sketches being hung in the hallway outside of Chris and my offices, a space we shared with a few Mulan story artists,” said Kevin Lima. “With their barreled chests and huge forearms, these warriors reminded us of gorillas.”

“They called me into their office and I think we were the first three people, to work on the project,” continued Siepermann. “They just had obtained the rights from the Burroughs-family and still didn’t really know, what to do with the story. So basically, what they did was giving me the novel, telling me to doodle away and explore as many directions as I could think of, concentrating on the gorillas. I went back to Germany with that brief, doing exactly that: sketching away, doing a lot of quick drawings, exploring the characters and their possibilities.”

In future post we’ll show Harald’s first gorilla designs. For now, here are the drawings and copies of the color design of the Chinese Soldiers for Mulan.

A follow up to a previous post about the character John Silver from the Walt Disney film Treasure Planet.

After several weeks working on John Silver, Harald Siepermann continued to work on other characters from Treasure Planet as well. However, later that year Siepermann did another take on the Silver character, but with a slightly different approach. Here are some of these designs.

In addition to the cat Oscar, Harald Siepermann also worked on the colorful parrot Rebecca. The name Rebecca would later during the production change to Corina.

In the story, Rebecca and Oscar are bound to each other. Oscar is in trouble because it seems like he ate Rebecca, and therefore broke Doris’ house rule: you don’t hurt other animals, let alone eat them. Oscar asks Rebecca to show herself to Doris, as prove that he didn’t ate her. Rebecca promise to help him, only if he helps her as well by finishing business with her no-good owner Jim.

Both characters have opposite characteristics. Rebecca is a strong and confident bird with a big personality. In contrary to Oscar, a rather clumsy cat for who everything is strange and scary.

As a direction to explore the character Rebecca, director Piet Kroon suggested Harald Siepermann to use the actress Goldie Hawn as model. Notable features are her big eyes, big mouth, big hair, and overall sweet look. And her small nose could be used as a small beak for the parrot.

Here are various designs of Rebecca by Harald Siepermann.