In Walt Disney’s Tarzan, the British Clayton was hired by Jane and Professor Porter as guide and protector, during their excursion in Africa. However, Clayton has a second agenda, and that is to hunt gorillas.

“When we started with Tarzan, we were aiming at the impossible, by not giving away that Clayton was the villain of our movie, but using Kerchak as a kind of a red herring instead,” remembered Siepermann. “That of course couldn’t work, but we tried anyway. The idea behind it was that not too long ago, in the history of Hollywood movies, the great white hunters were the heroes in these kind of movies. And who would make a better great white hunter than Clark Gable. In fact, he played these kind of roles. So I looked at him a lot.”

By that time the actor Brian Blessed was already cast as the voice of Clayton. Harald actually was not familiar with Brian Blessed, and therefor didn’t model his design after the actor, “…to the great surprise of the directors,” remembered Siepermann, “who were expecting a kind of caricature of Brian Blessed, the wonderful voice of Clayton. I just had a tape with some of his lines but in my ignorance, didn’t know what he looked like, and worked only from what I was hearing. When I had my first sketches ready, I had to board them and run the voice tape to the directors to convince them that it would work, even if there was no resemblance.”

“Gable as Clayton was too ‘American’ for my taste, so I looked a lot at J.C. Leyendecker’s work to get a feel for the ‘English Gentleman’: well educated, ready to kill, but deciding against it,” continued Siepermann. “I found out, that Leyendecker’s favorite model was the actor John Barrymore, grandfather of Drew, so I went directly to the source. You’ll find more Barrymore in Clayton than Gable.”

But while there is the resemblance of Gable and Barrymore in Clayton, Siepermann used several other sources as reference. “I wanted Clayton to be ‘English’, so I tried everything I could, using the likes of David Niven as reference, Errol Flynn, even Prince Charles and Prince Phillip, basically everything I could get hold off…”

“I never miss out to look not just at other (animated) movies, but at the historical real thing and get familiar with it, doing my research,” continued Siepermann. “This is Sir Richard Burton – not the actor – the first and only non-Muslim, who ever was inside the Kaaba, who first translated the Kamasutra and The Arabian Nights, who discovered the Victoria Falls and the source of the Nile. The blueprint of any generic explorer.”

The directors liked Haral Siepermann’s design for Clayton, and it became an important reference for Supervising Animator Randy Haycock, who brought the character to life.

When Harald Siepermann started to work on the production of Walt Disney’s Tarzan in July 1995, his job was to explore visual possibilities for the gorilla family, and their relationship with a young Tarzan. Once that task was completed, the directors Kevin Lima and Chris Buck set Siepermann on another path, to create visual development for the characters in the movie.

Harald Siepermann started with this task in January 1996, and the first characters he worked on was Professor Archimedes Porter. The first direction in exploring this character was somewhat odd. Since the movie was animated and it dealt with a primate world, the directors thought it would be fun if Porter had some resemblance of a monkey himself. Harald took that task to his hart. Below are some of these studies:

Despite Harald’s well received designs, the directors decided to keep Porter more in human form, and Siepermann started to look for a more realistic approach. “It was his first time in the jungle and he was to be completely overwhelmed by what he saw and found,” commented Siepermann on the character. “Things and animals he so far had encountered only in the books he had studied and written. He would get lost in some small detail, a frog or a bug, and he would overlook the gorilla behind him. He needed Jane to take care of him. I thought a lot of Catweazle, a character from an English TV-series from the seventies, which nobody in the states knew about. Another big influence was Jack MacGowran in his role as Prof. Abronsius in Roman Polanski’s Vampire Killers, a movie only Kevin Lima knew about.”

A big breakthrough with the character came when Harald Siepermann thought of Albert Schweitzer, a German philosopher, humanitarian, and musician. “I didn’t know where to go visually with this character, because I didn’t want to use other cartoon-professor as reference,” commented Siepermann. “I wanted to get away from that cliché and was looking for some other kind of inspiration. Then it hit me. Some sketches I had done reminded me of Albert Schweitzer, a philosopher, doctor, musician and humanist, who founded a hospital in the jungle at the beginning of the last century. Always very much a gentleman, always in a white shirt and a bowtie.”

This was April 1996 and during that time Harald was working for 6 months at the Walt Disney studio in Burbank. “Again, when I told that to the team, nobody had heard about him,” continued Siepermann. “There was no google at the time, so I was more than lucky to find a German book about Schweitzer in a second-hand bookstore in St. Monica. I made a board and sold the idea to the directors.” Siepermann continued to develop Professor Porter in this direction. His designs where very much appreciated by the directors and were the starting point for Dave Burgess, the Supervising Animator, who brought Porter to life on the screen.

Below are some of Harald Siepermann’s designs:

In the episode Winnie Wana, Alfred’s girlfriend, is a big fan of Michael Duckson. So much, that she has little attention for Alfred. Stricken with jealousy, Alfred decides to combat the pop star, by learning to play classical music on the piano, with the hope to impress Winnie and regain her attention.

For the episode Harald Siepermann created new designs for the character Michael Duckson. When the designs were completed in late August 1989, Harald send them by fax to the studio in Tokyo, Japan, where the production of the series was organized. The episode eventually aired on December 4, 1989, on TV Tokyo / Channel 12 in Japan.

Below are Harald Siepermann’s designs for Michael Duckson:

In August 2003 Harald Siepermann created character design for a project called Miss Mary Poppins, that was slated to be an animated feature film. The story treatment was developed by Greg Manwaring and Patrick Gleeson, and was a prequel to the beloved Walt Disney movie from 1964. It tells the story about a young Mary Poppins, and how she came to be the magical nanny.

The project was developed for the Walt Disney studio. Harald Siepermann was asked by Greg Manwaring, with who he befriended since the days of Who Framed Roger Rabbit, to create character design for a young Mary Poppins, to have some visuals for the pitch of the project.

While the people at the Walt Disney studio really liked the project, it was never green lit because at that time the Travers Estate did not allow the studio to develop anything further with the property.

Below you’ll find some of Harald Siepermann’s designs.

Happy Birthday Harald Siepermann! Sadly your life ended prematurely, but you left the world with an immense legacy of wonderful artwork, and you continue to be a source of inspiration for aspiring artists and character designers. 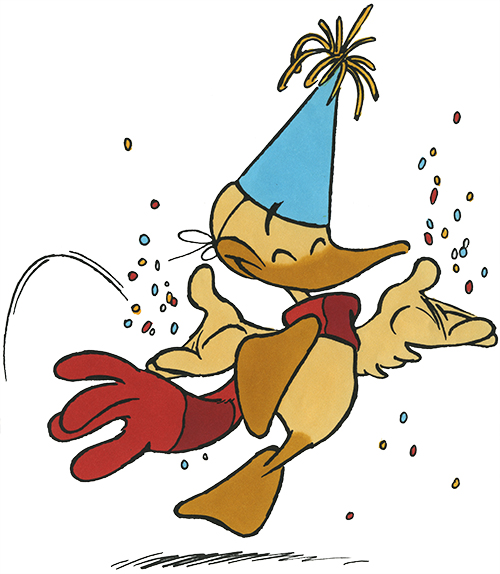 Visual development art by Harald Siepermann for Walt Disney’s Tarzan. When Harald Siepermann started on Tarzan his job was to explore visual possibilities for the gorillas and their relationship with a young Tarzan.

Television series Alfred J. Kwak often dealt with serious topics such as drugs, whale hunting, poverty, the environment and diseases. Another topic was fascism. The main villain of the series was the crow Dolf de Kraai [Dutch name]. Dolf is an interesting villain, different from your ordinary vicious pirate or mean stepmother, that you often see in children television series.

Early episodes give more insight in Dolf’s childhood. His father was an alcoholic and his mother died when he was very young. Because of his unstable childhood, Dolf always seems to walk the dark path of life. This becomes most evident when he starts his own political party called the National Crows Party, and becomes the dictator of Great Waterland. Dolf, with his small moustache and military uniform, is clearly a caricature of Adolf Hitler.

One of his political plans includes that all crows have to be completely black. There cannot be any white crows or crows with spots. Ironically though, because, since his mother was a blackbird, Dolf has a yellow beak himself which he paints black with shoe polish every day. Also animals that are against Dolf’s plans, are deported.

Due to their different personalities, Alfred J. Kwak and Dolf de Kraai often cross paths throughout the television series. Thanks to Alfred’s actions, Dolf’s political party is dismantled, and Great Waterland becomes a democracy again.

… and below are a series of sketches by Harald Siepermann.

Harald Siepermann worked out the story arc of the series together with Dutch artist Herman van Veen, and he did all the character and prop designs together with Hans Bacher. Siepermann made the character designs with pencil, and Bacher did the inking and the colors. Eventually they created over 200 unique characters for the series. An amount that’s quite unprecedented for animated television series.

Once the characters were completed in August 1988, the designs were collected in a book called Character- and Color-Designs for Alfred J. Kwak, which served as an instruction guide for the animators in the Japan, where the actual animation was done. The book contained model sheets that explained the structure of the characters, color codes, costumes designs, and character comparative sizes.

After Alfred J. Kwak premiered in Japan the episodes were aired on a weekly basis. On December 24, 1989, the series premiered in the Netherlands, and a year later in other countries around the world as well. In many countries the series became an immense success and a merchandise phenomenon.

Harald Siepermann often used songs as a source of inspiration drawing subjects, “I was using their lyrics as a source of inspiration, I was kinda listening for cues, illustrating their songs or people from them,” he commented about his sketch work in 2006. “I was, without thinking, doing little character design studies. This again ‘just happened’, I never thought about it as a concept, I was just desperately looking for things to draw, and I always preferred stuff from my imagination rather than drawing existing people, mimicking styles or doing landscapes.”

Below are several sketches from one of Harald Siepermann’s sketchbook from 1985, based on the song Every Sperm is Sacred from Monty Python’s The Meaning of Life.

In continuation of the post The Gorillas of Tarzan, here is more visual development art by Harald Siepermann that he created in the second half of 1995 for Walt Disney’s Tarzan.